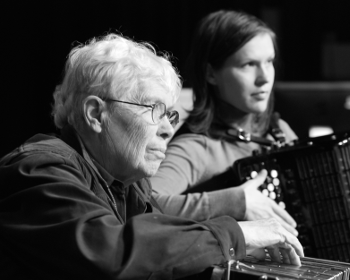 Improvisation for two crowds (on being on and off-line)

CETL (NI): The Centre for Excellence in the Creative and Performing Arts
in collaboration with the School of Music and Sonic Arts and Drama at Queen's University Belfast
at Brian Friel Theatre, Drama Department (QUB)
Belfast, Northern Ireland (UK) 15.05.2009

The concert was also shown publicly in SecondLife.

Droniphonia (by Pauline Oliveros) at Sonorities Festival of Contemporary Music

New works were written for and performed by musicians located in five telematically interconnected locations across three continents, with audiences able to follow the concert both locally as well as online.